Posted on February 26, 2014 by Siobhan McNamara 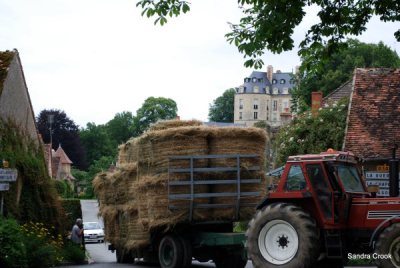 Last spring Jean-Jacques heard of a looming fodder crisis over in Ireland and immediately offered French farmers a price above the going rate for straw. They sold willingly.

The crisis continued and Jean-Jacques turned over a decent profit, gleefully buying and selling more as prices soared.

That summer he stocked up. But Ireland had a boom summer with great growth.

Unlike France. Jean-Jacques watched and waited while prices rose.

With animals dying, his angry neighbours descended in force.

Jean-Jacques tried to defend his investment but a pig farmer bundled him into a trailer of bales, thinking of the fine hams he would have come Christmas.

This entry was posted in Uncategorized. Bookmark the permalink.

49 Responses to The Last Straw